What is it that holds together

What would otherwise drift apart

If not an innermost receptive call

To come into circulation

A call that once made

Can then be relayed

Until the balance is reached

When the call from without

Is equal to the call from within

A call that can only be understood

When natural space is perceived as continuous receptive attractor

And natural boundaries as energetic distinctions

Quite a few years ago, now, I became aware that it doesn’t make sense to regard matter-energy and space-time as if they are separable from one another (see, for example, Rayner 2011, 2017). This is simply because if space as an intangible presence is literally everywhere, without limit, and matter is only somewhere, then it follows that matter and space are mutually inclusive, not mutually exclusive in the way that conventional logic presupposes. Furthermore, this is only possible if matter is a dynamic configuration of space in space. In other words natural geometry is a flow-geometry of ‘place-time’, not a definitive geometry of matter and space as three dimensional structure.

So what do I mean by ‘place-time’? Simply this:- a dynamic inclusion of space in place. Nature itself.

‘Quantum reality’ is ‘intangible’ — a frictionless and hence immeasurable quality of continuous occurrence. A realm of ‘possibility’ that tangible reality emerges from and subsides into.

Natural substance (~matter) is a tangible local and temporary expression of receptive-responsive relationship between intangible space and intangible time resulting in ‘surface tension’ of varying intensity in solid, liquid, gas and plasma form and from sub-atomic to galactic in scale.

Distance is tangible length of travel between one locality in space and another.

Duration is tangible interval elapsing between one locality in time and another.

Living bodies are those in which surface tension is sufficient to sustain a high degree of co-ordination around a coherent self-identity as a centre of receptive and responsive awareness (sentience/ consciousness).

Non-living bodies and materials are those in which surface tension is insufficient to sustain a coherent self-identity as a centre of sentience.

Death is the release of surface tension into the receptive grace of space.

Rayner, A. (2017) The Origin of Life Patterns In the Natural Inclusion of Space in Flux. Springer

The Cage, The Climbing Frame and The Swimming Pool

Do We Really Make Decisions 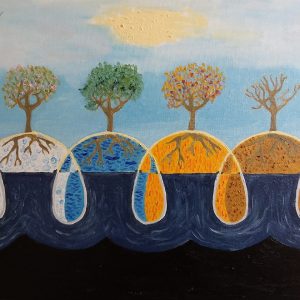 The Essence of Regenerative Sustainability